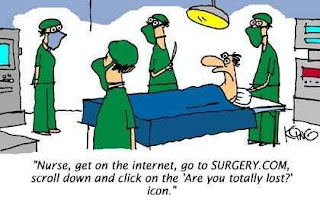 Instead of a race report, I am writing a surgery report. It’s almost the same thing.

I met my parents in Minneapolis last Monday. On Tuesday, we went to clinic to meet the surgeon for the first time. His easy going demeanor instantly relaxed us. And let me tell you, I was feeling far from relaxed. Despite the knowledge that this surgery was imperative, and despite the knowledge that I was in capable hands, I was profusely nervous, as evidenced by my incredibly high blood pressure readings and racing heart rate.

The appointment was a meet and greet coupled with a hands on evaluation of my rib area. He poked and prodded and then injected some lidocaine in an effort to numb it which would allow him to pinpoint where the pain was occurring. If the pain was gone after the numbing agent was injected, then that would be the point where he would make the incision and look for the problem.

After the exam, Dr. Grail explained that the surgery would have two components. The first phase of the surgery would be exploratory where he would attempt to find and diagnose the problem. The second phase would be to correct the problem. He estimated the procedure would take 30 minutes. I nearly dropped off the exam table; three years of pain reversed in 30 minutes? It seemed impossible. I said, “Whoa, there cowboy. No need to rush. Let’s do this right.”

I can only compare the surgery to an Ironman. The similarities are just uncanny. The clinic visit was analogous to packet pick-up. I had a sleepless night before the surgery. There was an unusually early wake-up call. I had the jitters. There was a check in procedure in the morning before I could do anything else. I got a nifty bracelet that I could not take off until after I was done. I had to get body marked (my body marking consisted of the surgeon inking my rib cage where he wanted to make his incision), but they did not put my age on my calf. There was a lot of hustle and bustle followed by a lot of waiting around before the whole thing started. I had to put all of my clothes in a plastic bag which had my name on it; the bag was moved to another location, and I could not retrieve the bag until afterwards.  Instead of a canon blowing to mark the beginning I got an IV filled with magical medicine that knocked me out.

The aftermath was not too dissimilar from the end of an Ironman. I had an IV going, I was disoriented and I was incredibly swollen and bloated. My hair was a mess. My eyes looked glazed. And the soreness and fatigue lasted for days. I did ask for photos for posterity (and this blog), but was emphatically turned down. Where is ASI when you need them? Sure they would have charged $1,000 for a 1×1 photo, but how can you put a price tag on a once in a lifetime experience? In case you were wondering, I will not get the hospital logo tattooed on my ass.

I always knew Ironman prepared me for something other than just another Ironman.

The surgery itself was very productive. Rather than the ambitious 30 minutes that was predicted, it lasted an hour. In the exploratory phase, Dr. Grail found fractured cartilage at the end of the 11th rib. The cartilage was so damaged it basically crumbled under his touch. This cartilage was fractured in the 2009 accident and due to the lack of blood flow to cartilage it could not heal. The damaged cartilage caused instability in the rib making it rub the nerve that sits behind it. The continued rubbing over so much time led to the development of an almost 2 inch neuroma on the nerve (i.e. an intercostal neuroma). A neuroma is a tumor-like growth of nerve tissue and this is what was causing the pain. Correcting the problem included:  getting rid of the damaged cartilage and excising the neuroma and the nerve. Just to be clear on why this was so difficult to diagnose in the first place, Dr. Grail has only seen an intercostal neuroma on one other occasion and he has done more corrective rib surgeries than anyone else.I spent the rest of the week in Minneapolis recovering. I slept a lot, went for walks and watched the Olympics like I was going to be quizzed on it later. We met some family friends for dinner, explored an art fair, and cleaned out Trader Joe’s.  I even challenged my mom to a reading contest; we would both start the same book at the same time and see who finished first. I won by default. I was the only one who started (FYI, the book is called Emily and Einstein by Linda Francis Lee and was quite a good read).

My parents were excellent care takers and made the recovery process as comfortable and easy as possible. A few days before we left for Minneapolis, my mom said to me. “You better be fun while we are there.”  I think she was ribbing me (get the pun?), but I do believe we made the most of our time in Minneapolis.

I am unsure of what my recovery will bring. Dr. Grail did not set out a time line to follow. Of course, I would love to get back to triathlon, but before I start riding again after a 2 year hiatus, I want to be pain free running and swimming. While I am still feeling the effects of the surgery, there is a noticeable absence of nerve pain. I am hesitantly optimistic that once I have healed I will be pain free.